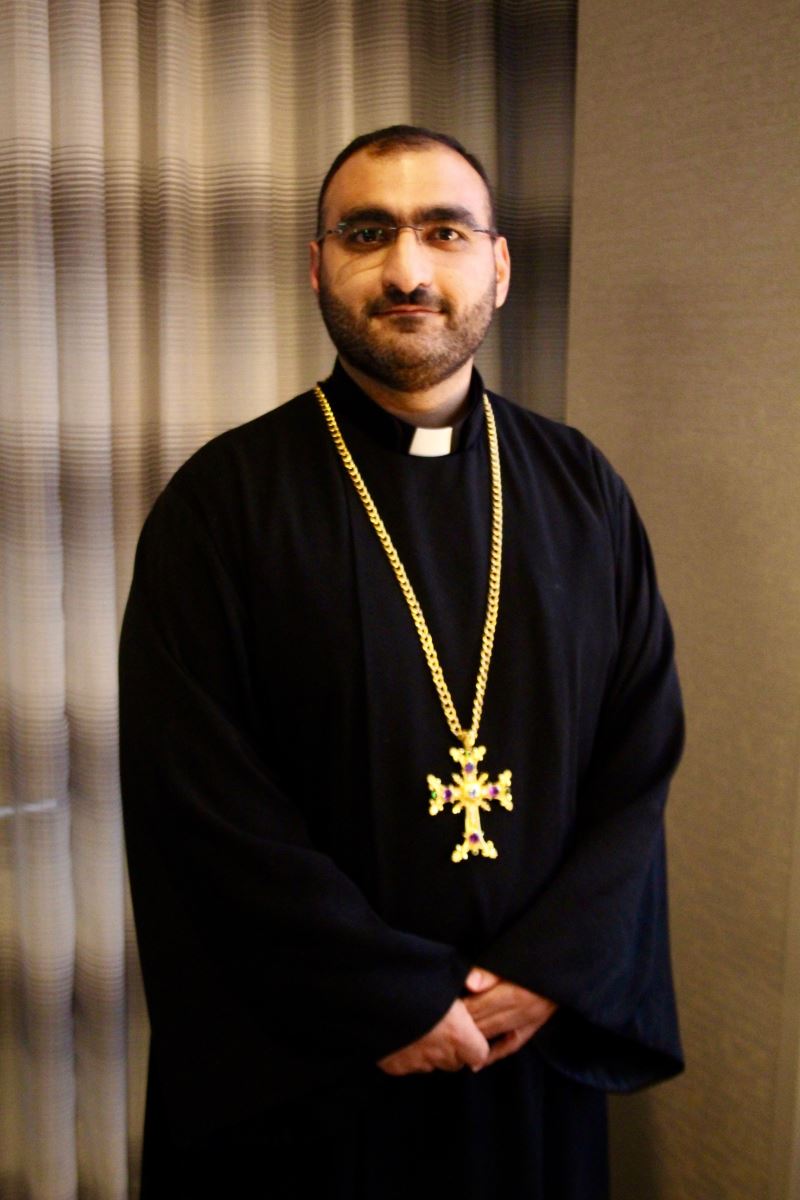 Rev. Fr. Hrant Kevorkian (baptismal name Sebouh) was born in Anjar, Lebanon in 1986 and has  served in the Armenian Church since his early childhood. After graduating from  high school, he studied at Lebanese University for two years prior to his  acceptance into the Theological Seminary of the Holy See of Cilicia, where he  successfully completed the three-year special program for the married  priesthood. He also completed one year of graduate studies in pastoral theology  at the Near East School of Theology in Beirut. A talented musician, Der Hrant  was an active member of Shnorhali choir (the official choir of the Holy See of  Cilicia) and the Gomidas Chorus in Anjar. He also took special music courses  from his conductors, in order to serve as the director of the Gakavig  Children’s Chorus and Harach Youth Chorale, both in Anjar.
He was also a teacher in the Sunday School for many  years, and between 2007 and 2010 he was in charge of the Shoushanian  Sunday School in Anjar.
Archbishop Oshagan Choloyan, Prelate of the Eastern  Prelacy recruited him as a candidate for the priesthood and the Prelacy  sponsored both his education at the Seminary and his graduate studies. In May  of 2008, he was ordained a sub deacon by His Eminence Archbishop Gomidas  Ohanian, the Grand Sacristan of the Cathedral of St. Gregory the Illuminator of  the Holy See of Cilicia, Antelias, Lebanon. The following year, His Grace Bishop  Shahan Sarkissian, Prelate of the Diocese of Aleppo, ordained him to the  diaconate.
In 2010, Deacon Sebouh was married to Tamar Kuesbegian  after which his ordination to the married priesthood took place on September 26,  2010, at Sourp Boghos Church in Anjar, Lebanon. The Divine Liturgy and  Ordination were performed by His Eminence Archbishop Gomidas Ohanian, The newly  ordained priest was renamed Der Hrant, in honor of the late Archbishop Hrant  Khatchadourian, the first Prelate of the Prelacy of the Armenian Apostolic  Church of America. Present at the ordination was Dr. Vazken Ghougassian,  Executive Director of the Eastern Prelacy, who on behalf of the Prelacy, served  as the Godfather of the new priest.

After his arrival to the United States, Fr. Hrant served as a pastoral intern  at St. Stephen's Parish in Watertown, Massachusetts and as an outreach priest  to the parishes of the Eastern Prelacy for six months.
Prior to his assignment at St. Sarkis Armenian  Apostolic Church in August 2012, Fr. Hrant served as Pastor at St. Hagop  Armenian Apostolic Church in Racine, Wisconsin and St. Paul Armenian Apostolic  Church in Waukegan, Illinois for eight months.
In 2015, he was awarded the right to wear a Pectoral  Cross by His Holiness Aram I Catholicose of the Holy See of Cilicia.
In 2022, he received his Masters of Art in  Pastoral Ministry degree from SS. Cyril and Methodius Seminary in Orchard  Lake, Michigan.
Rev. Fr. Hrant and Yn. Tamar Kevorkian are blessed  with two children, their son Nareg Sebouh Kevorkian and daughter Lori Aleek  Kevorkian.